Skip to content
Docs
State of JS survey is online!Give Nx a thumbs up→

As applications grow, builds can become unacceptably slow, which leads to slow CI/CD pipelines and long dev-server startup times. This slowness decrease team productivity due to long waits for local compilation, and clogged up CI/CD pipelines.

Module Federation provides a solution to the scaling problem by allowing a Single Page Application (SPA) to be sliced into multiple smaller remote applications that are built independently. There are some costs to slicing an application through Module Federation:

Nx provides the best experience for teams that want faster builds, but want to also minimize the downsides that come with Module Federation. Starting in Nx 14, we provide specialized generators, executors, and utilities that make Module Federation easy to set up and work with.

When should I use Module Federation?

Whether Module Federation makes sense for your team depends on the size of your application. Although Nx hides most of the complexity around Module Federation, it still comes with some downsides:

With Module Federation, a large application is split into:

In the next section, we will see an example with a host app (host) and three remotes (shop, cart, about). Although all the applications are independently built, thus have no dependency between them, conceptually you can think of them in the following hierarchy.

The best way to understand the setup is through an example. In this section, we will create a host application with three remotes under these routes:

But before we begin, we've put together a couple of example repos (React and Angular) for you to inspect if you want to skip ahead.

These examples have fully functioning CI workflows that are simple to set up. You can see what the CI does by viewing the sample pull requests in each repo. Also notice the Nx Cloud integration, which gives you insight into each pipeline. We'll touch on this later in this guide. 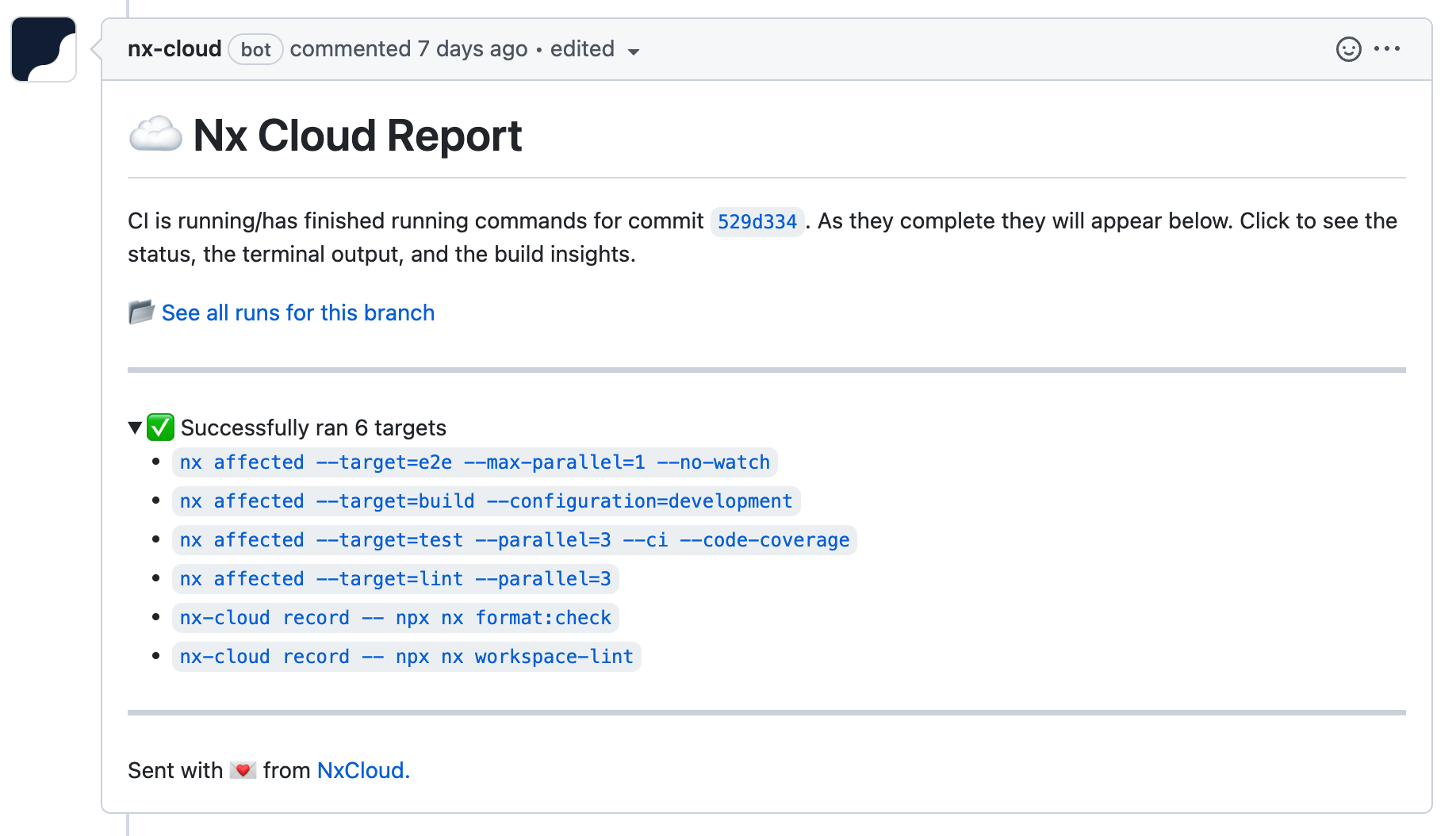 You will be prompted to enable Nx Cloud in the workspace. For the best experience, we highly recommend using Nx Cloud to take advantage of distributed caching and other features it provides.

Next, generate the host and remote applications.

Now, serve host to view it in your browser.

The above command serves host in development mode, whereas the remotes are built and served statically. That is, changes to host will update its bundle, but changes to remotes will not update.

To run one or more remotes in development mode, use the --devRemotes option.

The above command starts the shop and cart remotes in development mode, but about will remain static.

Both commands serve the whole system. By passing --devRemotes, you configure what parts of it you will be changing. For instance, in the example above, you can go to the about page and back. This is different from having different versions of the app for every team.

To understand how Module Federation works with Nx, let's take a look at three files that control this feature.

In the future, Nx may automatically handle this for you.

We'll talk about what withModuleFederation does in a bit, but for now the important part of the configuration is the use of module-federation.config.js which we will examine next.

This file is the main configuration for the host, and you'll see module-federation.config.js for the generated remotes as well.

The required name property is the magic to link the host and remotes together. The host application references the three remotes by their names.

It is important that the values in remotes property matches the name property of the remote applications. Otherwise, webpack will throw an error. Nx handles this automatically for you so there shouldn't be an issue unless it was modified manually.

In the previous section, we saw withModuleFederation used in the webpack config. This function is an abstraction on top of webpack's ModuleFederationPlugin with some Nx-specific behavior.

With Nx, the developer experience (DX) when working with Module Federation matches more closely to development on a SPA. You don't have to worry about managing a bunch of configuration, and most things just work out of the box.

There are cases where excluding or changing the shared configuration is required. For example, shared libraries are not tree shaken, so to enable this behavior you must exclude them from being shared.

The shared function can return an undefined to use Nx's default value, false to exclude it from being shared, or a shared config that webpack supports.

The default configuration, without overrides, should work well for most workspaces, and we encourage you to analyze your bundles before optimizing the shared behavior.

To analyze your bundle, run build with --statsJson and use a tool like webpack-bundle-analyzer to the size of your bundles.

If you have any feedback regarding this feature, we'd love to hear from you--check our community page for links to our Slack and Twitter.

To use Module Federation well, we recommend that you enable Nx Cloud. If you haven't enabled it yet when using create-nx-workspace, you can do the following.

With Nx Cloud enabled, a large set of builds can be skipped entirely when running the application locally (and in CI/CD). When you run builds through Nx + Nx Cloud, the artifacts are stored in the distributed cache, so as long as the source of a given remote hasn't changed, it will be served from cache.

You can see this behavior locally if you serve the host twice.

The second serve starts up much faster, because the three remotes (shop, cart, about) are read from cache. Not only that, any other copy of the workspace will also benefit from the cache if they haven't changed a particular remote. If, say, someone is working on shop, they will get the cart and about builds from the cache.

If you inspect the terminal output, you'll see something like this, even if you are on different machines.

> nx run about:build:development [existing outputs match the cache, left as is] (snip) > NX Successfully ran target build for project about Nx read the output from the cache instead of running the command for 1 out of 1 tasks.
More details

This caching behavior is crucial. If you don't have a build system supporting distributed computation caching, using Module Federation will be slower. It takes longer to build shop, cart and about separately than building all of them together as part of the same process.

When using Nx, you rarely have to build all of them because most of the time you work on one remote, other remotes will be retrieved from cache.

This also helps things like end-to-end (E2E) testing because testing against a static server is much more efficient than starting many servers in development mode. When the CI pipeline runs E2E tests, all the remotes should be served statically from cache.

In addition to computation caching, Nx Cloud also comes with:

In this section, we'll examine how to set up your production build and simulate a deployment to http://localhost:3000.

First, make sure you have implicit dependencies from host to each remote. In case you didn't already set this up, add the following line to the host's project configuration.

Next, open up the production webpack configuration file and update the remote URLs to their own sub-folder under http://localhost:3000.

Now you can run nx build host to build all the host and all the implicit dependencies in production mode.

After running that command you'll see the following artifacts in dist folder.

Now, we can add a simple deploy command to simulate deploying this folder to production.

You can then run nx deploy host to see the application running on http://localhost:3000. If you inspect the production folder you'll see the following files.

The above command is just an example. You'll need to use what make sense for your team and workspace.

For examples of how CI/CD pipelines can be configured using Nx Cloud and GitHub, see our React and Angular examples.

By using Module Federation you essentially split your application build process vertically. You can also split it horizontally by making some libraries buildable.

We don't recommend making all libraries in your workspace buildable--it will make some things faster but many other things slower. But in some scenarios making a few large libraries at the bottom of your graph buildable can speed up your CI.

Because Nx Cloud's Distributed Tasks Execution works with any task graph, having buildable libraries is handled automatically. If you have a buildable components library that all remotes depend on, Nx Cloud will build the library first before building the remotes.

You could use Module Federation to implement micro frontends, but this guide showed how to use it to speed up your builds.

Module Federation allows you to split a single build process into multiple processes which can run in parallel or even on multiple machines. The result of each build process can be cached independently. For this to work well in practice you need to have a build system supporting distributed computation caching and distributed tasks execution (e.g., Nx + Nx Cloud).

When a developer runs say nx serve host --devRemotes=cart, they still run the whole application, but shop and about are served statically, from cache. As a result, the serve time and the time it takes to see the changes on the screen go down, often by an order of magnitude.

When a CI machine runs say nx build host --configuration=production, the shop, about and cart remotes will either be build on separate machines or retrieved from cache. Once all of them are built, the build process for host will combine the file artifacts from all the remotes. Nx Cloud takes care of distributing the tasks and moving file artifacts across machines. As a result, the worst case scenario build time (when nothing is cached) goes from building all the code to building the largest remote, which is often an order of magnitude faster.

Report an issueEdit this page